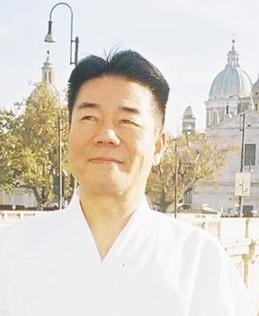 Kishi by Alice Whieldon & Paul Lundberg
​
Paris, 1971, the ragged end of Cultural Revolution and a city raw from student protest; a backdrop of Vietnam spiralling to the inevitable crash.  A tired young Japanese man emerges from the dark of Gare de L’Est after a long journey by sea and the Trans-Siberian through Russia.  Clutching only a suitcase and a piece of paper with a name and address, with little English and no French, a half-completed degree in landscape architecture and the blessings of his Shiatsu masters, Namikoshi and Masunaga, to carry the torch of Shiatsu to Europe, 21 year old Kishi Akinobu (then Shinmei) takes a step into the dusty European bustle of the city of his dreams and marks the beginning of a cross-cultural love affair that would last over half a century.

On 23rd October 2012, age 63, Kishi died peacefully, at home in Maebashi, Japan, with his wife and long-time collaborator, Kyoko at his side.

It is hard to characterise Kishi.  He was so much himself that he slipped through the categories that might have captured him.  From the outside, his life was one of contrasts: the traditional tatami sitting room of his home next to a kitchen decorated with old Delft tiles; the Italian cashmere sweaters worn over traditional handmade hakama trousers; the Peugeot, driven fast round bends on the weekly trip to the Shinto shrine for spring water and to offer sake to the gods; sashimi and fine green tea one week, steak and chips in Aberdeen the next.  The contradictions spun out, always and only, from a central clarity of purpose, discipline, practice.  The touch of an angel informed by the humour of a shy man who cared too deeply about how things really are to mind what others thought for long.

Kishi began his Shiatsu training with his father aged 9, and formally in 1968 with Namikoshi, the great man having spotted the youngster at a taster class where Kishi was moonlighting from university.  On entering the busy school he was immediately drawn, like everyone, to the charismatic and controversial Masunaga who taught a potent mix of philosophy and Shiatsu to packed classes.  When the latter left shortly after to found the Iokai, a post-graduate college where he could further his own research unquestioned, his young acolyte tagged along.

Diligent application and obvious talent brought Kishi to the master’s attention and before long the two became a formidable team, Masunaga explaining his principles of Shiatsu and the disciple demonstrating, in classes and at conferences where Kishi, a handsome, snappily-dressed affront to solemnity, was encouraged to expound on the subject in front of the Shiatsu elite of Japan and Korea.  For ten years the relationship was an important one for both of them.  But the younger man finally reached a crisis in his own Way.  Dedicated to mastering Shiatsu, he had worked himself to an impasse.  Exhausted, he surrendered to the moment and turned his back on Shiatsu only to find it returning to him in a new form and with renewed vigour.  Kishi was acknowledged by Masunaga as a master in his own right, and thus the two agreed to part company.

Calling his own approach, Seiki Soho, to honour his insight and individual approach, Kishi set out again for Europe on a mission to develop and disseminate his own Way as well as enjoy what he loved of the West, living for some years in Germany and Belgium.  Right up until June 2012, when his health suddenly faltered, he developed and shared his vision in countless workshops. What grew up around him was a body of students, some from Shiatsu but still others from various walks of life, all of them appreciating, not just the transformative treatments, but recognising in Kishi’s few words and way of life, a devotion to authenticity and a ruthless compassion that touched the hearts of those who felt its gravity and wanted more.

Even when a car accident in 1983 threatened to consign him to a wheelchair, he continued his teaching in Europe, applying the practises he had developed to recover against all predictions.  Marrying Kyoko in 1989 began a new and even more creative era and she increasingly travelled with him as his devoted accomplice, expanding his already extensive circuit and the demanding sequence of workshops that, though interspersed with respites in Japan, continued unabated until this summer.

As if not satisfied with this, Kishi (and later Kyoko too) also hosted an extraordinary series of extended residential workshops in Japan.  Every three or four years he offered his Western students a unique opportunity to experience the many and varied manifestations of what he called Ki Culture, so linking Seiki with its roots in Shinto and the hara arts.
Kishi was sometimes a controversial figure in Shiatsu, not least for his occasionally critical words about what he saw practised in the West.  In more recent years his appreciation for European practitioners led to a desire for greater unity and collaboration between the different styles, but his earlier reputation dogged the great master at times, his words still jarring for some. For others they were a wake-up call to examine their own lives and practice with greater rigour. Out of the thousands who met him over the years, many found in his touch a world-stopping moment of peace that, like a drop of calm in troubled waters, rippled out down the years to open a precious space.  It was not necessarily comfortable, but it was always valuable.
​
Kishi will be missed, is missed, by all who loved him personally.  But he is also a great loss to Shiatsu.  Although he turned his back on schools and structure and lineage with brusque dismissal, the baton had been passed to him whether he always liked and acknowledged it or not; and more lately he did.  Like his teachers before him, he was an original seeker and carried with him the knowledge, at a molecular level, of the warm, maternal hands of Namikoshi and restless genius of Masunaga, both men honoured in his own approach.  That approach has proved difficult to pin down.  It is difficult because he had a unique talent for capturing life movement in the present moment and offering back to each person, only themselves.  How do you name that?  It is a hard act to follow.  But Kishi wanted nothing more than for those around him to find their own moment and Way, in whatever form that took, not least, he once said, because he was keen to have a decent conversation.